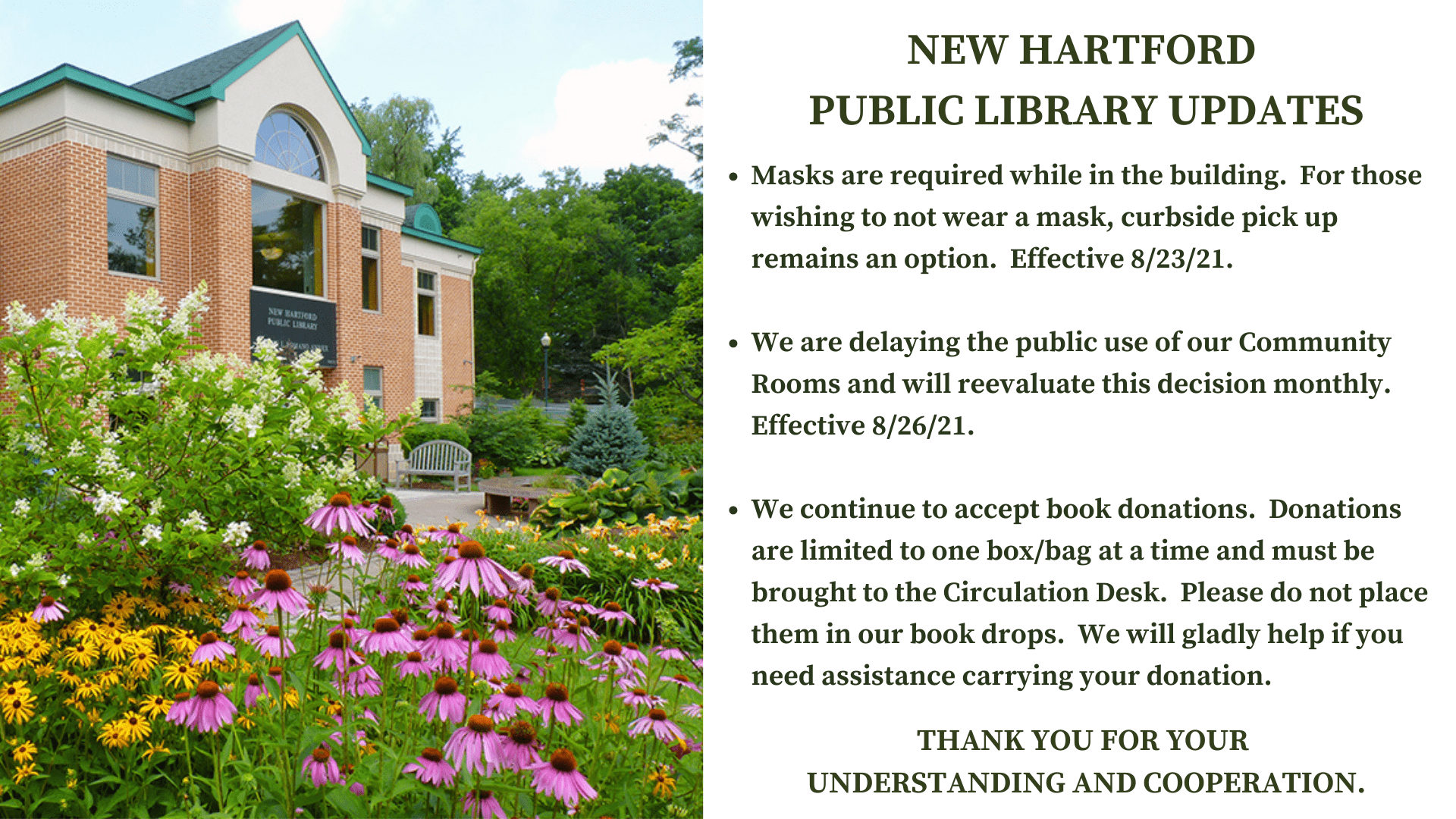 To Read, Do, See, and Use at the New Hartford Public Library

What's Going on at the Library

A full listing of our scheduled events can be found on our Events page. Interested in an event?  Simply click on the event and you can add it to your personal calendar.

The Pioneer of her own Fortune”: Nineteenth-Century Businesswomen in Albany and Across the United States (webinar)

To register for this webinar, go to: https://us06web.zoom.us/webinar/register/WN_L64k85D1RAuKvea0dBAu1g

When Dr. Susan Ingalls Lewis started research on Albany’s mid-nineteenth-century milliners thirty years ago, she expected to identify a few exceptional women willing to brave the male marketplace in search of commercial success.  What she discovered instead were thousands of small businesswomen engaged in a wide range of fields – not just milliners and dressmakers, but grocers, shop owners, boardinghouse keepers, laundresses, saloonkeepers, and small manufacturers.  Even more surprising than the number of female proprietors and the variety of their trades was the fact the vast majority of these women were well known and even notable members of their own communities.  Where previous historians of working women had insisted that respectable women could not or would not engage in business activities, Dr. Lewis found an almost overwhelming mass of evidence using such obvious sources as city directories, the census, and credit records.  Eventually, she was able to name more businesswomen in Albany’s credit reports than were recorded for the entire state of North Carolina in the same period (1840-1885).   This talk will summarize Dr. Lewis’s research on Albany, then expand the discussion to other mid-nineteenth-century U.S. cities, and finally place this material in a global context, based on the first international study of businesswomen in the “long” nineteenth century (published in 2020).

Susan Ingalls Lewis is Professor Emerita in History at the State University of New York College at New Paltz where she continues to teach courses in women’s history and New York State history. She received her B.A. from Wellesley College and her Ph.D. from Binghamton University. Her monograph, Unexceptional Women: Female Proprietors in Mid-Nineteenth-Century Albany, New York, 1830-1885 (Ohio State University Press, 2009) was awarded the Hagley Prize for the best book in business history. Dr. Lewis’s essay “More Than Just Penny Capitalists: The Range of Female Entrepreneurship in Mid-Nineteenth-Century US Cities,” recently appeared in Female Entrepreneurs in the Long Nineteenth Century: toward a Global Perspective (Palgrave Macmillan, 2020).  She is also the co-author of Girls to the Rescue: the Impact of World War I on Girls’ Series Fiction (McFarland & Company, 2020), as well as co-editor and contributor to Suffrage and its Limits: The New York Story (SUNY Press, 2020).

Made to Trade: The Centrality of Trade in the Origin Story of the United States

To register for this program, go to: https://us06web.zoom.us/webinar/register/WN_P-PEOBskST6V-ucLkeZuvA

Coinciding with publication of his latest book, The Overseas Trade of British America: A Narrative History, historian Thomas M. Truxes will discuss how Atlantic trade allowed the initial survival, economic expansion, and later prosperity of British America, and brought vastly different geographical regions, each with a distinctive identity and economic structure, into a single fabric. Truxes will show how colonial American prosperity was only possible because of the labor of enslaved Africans, how the colonial economy became dependent on free and open markets, and how the young United States owed its survival in the struggle of the American Revolution to Atlantic trade.

Thomas M. Truxes, Clinical Professor of Irish Studies and History at New York University, has written extensively on colonial trade and the early modern Atlantic economy.  He is the author of six books, including Defying Empire: Trading with the Enemy in Colonial New York (Yale University Press, 2008).

The Community Survey can be found here.

Free weekly emails of our latest books, movies, and music

Register for Yoga for Seniors HERE

The Library Value Calculator can be found here.

New Hartford Public Library and the Mid York System announces a partnership with Driving-Tests.org, a company dedicated to driver safety and education, to offer free Department of Motor Vehicles (DMV) practice tests to library patrons. The new service includes free tests specifically based on the state’s DMV materials. It is the only site of its kind to include accessibility tools that let users hear selections read aloud, make them into MP3s, translate pages into other languages, magnify text, and mask portions of the screen for greater visibility on the practice tests.

This partnership allows the New Hartford Public Library to harness the power of Driving-Tests.org’s specialized practice exams to turn new drivers into safer drivers. The new program will work as an outreach to several valued groups of patrons, including teens, those with disabilities, and seniors who need to take a renewal exam, as well as patrons at every other stage of life.

Driving-Tests.org is a part of Elegant E-Learning, Inc., an eight-year-old company with a proven track record of revolutionizing online resources for learner drivers. Driving-Tests.org is part of a plan to improve global driver safety by providing free practice tests written by experts to anyone who wants to study, along with online copies of official study guides. To help achieve this goal, the company has also created driving practice sites for the United Kingdom, Australia, New Zealand, Canada, and India.

Be sure to check out NHPL on Burbio!

Wowbrary: Stay up to date with the latest additions to our collection.